DnBBeats.com is dedicated to helping you achieve your dreams of destroying the dancefloor or just your own bedroom! By keeping you informed of the latest of drum n bass production techniques and secrets from around the globe. I’ll help you to pick the right software and equipment to maximize the damage your tunes make on the dancefloor. 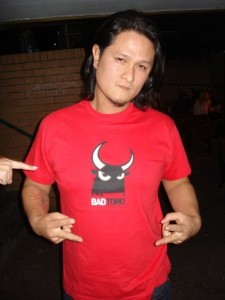 I’ve been a DJ/producer for about 6 years now.  I’m a founding member of one of Sydney Australia’s largest  Drum n Bass Crews called NoFrills. Nofrills was started by my wife (Felicite) and I way back  in 2005. Nofrills is basically a collection of people who’s sole purpose is to bring DnB to the Sydney Masses. All the big named artists have played at Nofrills and the good news for 2009 is there will be plenty more!

In my several years as a DJ/producer i’ve managed to gather vital studio knowledge and insight by way of chit chat or one-on-one sessions in the studio which i plan to share with you. Plus i will share all of my own experiences in the studio with you. So that you can avoid some of the pitfalls and mistakes that i have made along the way.