The Truth About Your Studio…

The Truth About Your Studio…

Well, i finally took the plunge the other day and booked in a real mastering studio for 2 days of drum and bass production madness!
I was really keen to see how my tunes were going to sound in a proper super acoustically treated room.

There was plenty of reasons for me wanting to be in a real studio but the main reasons for me was the lack of distractions I would have and the room itself. Sometimes its really hard to get tunes finished at home for whatever reason. Whether its work, or the mobile phone rings or friends pop over or whatever. All these distractions just pushes the finishing off of the tune that much further away. So after negoiating some the time off with my lovely wife I made preparations for an exciting 2 days.

Two Heads Are Better Than One!

I’ve been working a lot with my homeboy FUJ and to be honest he has been a great inspiration for me in the studio. I’ve written before about the benefits of working with somebody else in the studio and I’m still a great believer in the practice. Apparently you have some blind spot in your brain so if you have somebody there in the lab with you they can pick up on your mistakes its called ____
and is a really fascinating subject so check it out later.

Fuj promptly arrived in the morning to help load the van with all the equipment and away we went….So I thought. 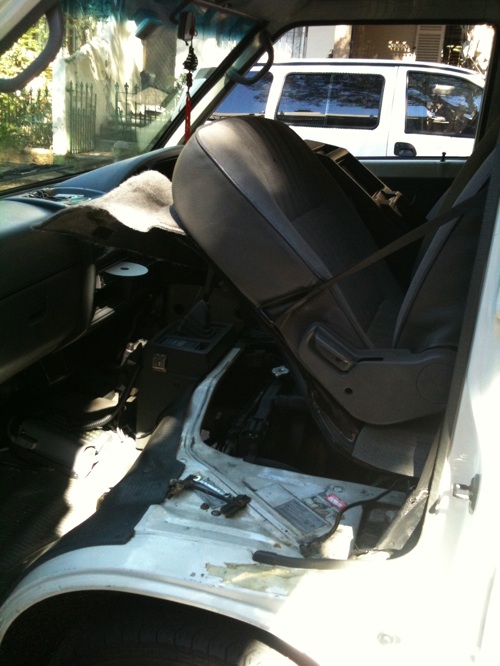 Had I Upset The DnB Production Gods?

On the way to the studio on one of the busiest streets in Sydney I promptly broke down. No lights worked on the van, no hazards NO NOTHING! I had a whole street of cars, trucks, vans and buses behind me so I jumped out in my flip flops and starting pushing the van down the street to the nearest side street. Luckily it wasn’t too far and Fuj was just up the road so after a quick call he came round to help me out.

Ripped my brand new pair of shorts as well! 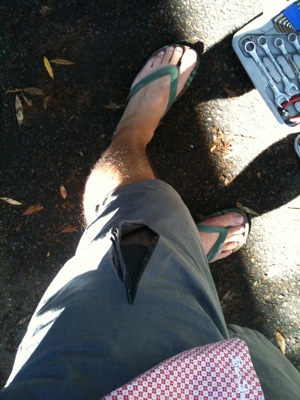 We tried jump starting the Van but to no available. So I send Fuj to buy me a new battery for the van as we thought this was the main problem. After a few minutes Fuj arrived with the new battery and in no time we were at the studio and having some fun!

I can hear clearly now…

After we set all the gear it was time to get GRIMEY!

I brought my Event Opals in the studio and they kicked major ass (the cheap Tannoy Reveal sounded great as well). They sounded as good as the day that I bought them in the show room. I will be the first to tell you that my unit/flat is absolutely terrible sounding but you probably know that from a couple of previous posts. However, being in a proper studio made me realize just how bad my room really is and to be honest I was NOT going to fix it using the Behringer Ultracurve or IK Multimedia’s A.R.C software (although ARC is pretty damn good!). 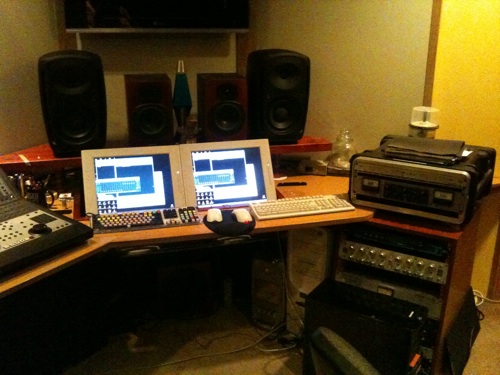 The real benefit of working in a treated room is the confidence it gives you when you need to perform any task EQ, Compress, Stereo spread etc. Now when your boosting or cutting say a kick drum you know that your making the right decision for the sample/track/. I have a standing wave of 50hz in the room so anything in the Key of G just BOOMS like crazy! Very annoying YES! Could I live with it? Hmmm…

For the first few hours of studio time I just listened to music. My own stuff. Noisia’s stuff. My own stuff. Had a cry. Then back to Noisia, Phace, Misanthrop, Fresh etc. It’s important to do this to get your ears to the new surroundings. Every hour or so I would take a break and walk outside to reset my ears. I was loving the studio big time and I hadn’t even started to do work yet! 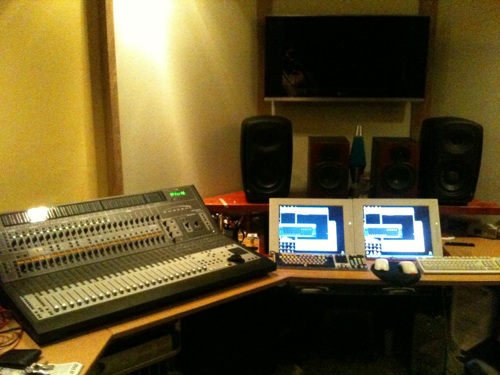 Because my room/unit is so bright I was amazed at how dull sounding all my drum hits/breaks were in the studio. So I quickly set about fixing that problem by doing a quick clean out of the crap samples from my personal library. Man… there was quite a few bad apples in there and its a boring part of drum and bass production but it has to be done. The same process went down for the kicks and hats etc.

I then went on a marathon 12 hour studio session just working on beats and bass and everything in between. As it was my first proper studio session I just went through some of my older tracks to see if anything good was lurking in the project folders. I was happily surprised to find quite a few bits that i really liked and I marked them down to work on later.

I was really shocked by my experience in the studio. Sure my knowledge and skills have improved over the last 6 years or more but I was literally blown away by how cool the whole experience was.

Well, if you’re producing at home, in the garage, in the bedroom. Take some time out to acoustically treat your room as best you can. Your beats may not be as bad as you think they are but the room is making them sound terrible. Now, I’m sure Noisia and Phace sounds brilliant in your lab but this brings me to the next part…

I’ve also spoke at lengths about A/Bing your stuff with quality tracks. Now, I’m going to say it to you again. DO IT! You have to do it. There is no other way of knowing whether or not your stuff is making the grade. I’ll admit I haven’t been doing it as much as I should but all that changed BIG TIME. I’ll write another post on the best practices of AB testing your stuff but for now just grab some of your favorite tunes and play them next to yours. Easy as.

My whole trip to the studio was not all bad. The good news was that stuff that I had made on my Sennheiser HD650s sounded great! Sure I had to tweak a few things here and there but all in all I was extremely happy with the results I obtained from using them. As a by product at home I only use the HD650’s now. I’m planning on getting some crap PC speakers as this seems to be a very popular choice for big named producers. PC speakers are tiny and they don’t throw sound all over the room so they would be perfect for my setup at home.

Studio’s offer a great way to work undisturbed from the world. A really good studio will give you the clarity and confidence to make important changes to your tune thus helping you create better tunes and mixdowns. AB a crap load and if you have a very difficult room to work in like myself work mainly on a good set of headphones and every now and again using some cheap PC speakers.

Right now me and Fuj are finishing off some tunes so that we can polish them off in the studio together in a big session. I really can’t wait to show you guys whats been going on. Till then I hope your beats are smashing up the dance.

Welcome to my Blog on Drum n Bass Production. Grab a coffee and enjoy my ranting.

Working with a Subwoofer again!

Working with a Spectrum Analyzer

Distortion and Saturation and Limiting in Drum and Bass

Rides Shakers and Cymbals etc in the BUSS?